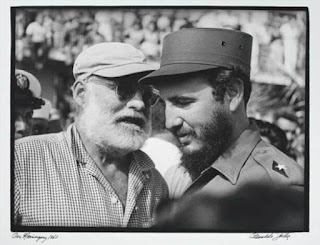 It’s safe to say that Hemingway set me on the course of the writer’s life. He certainly loomed large in my development as a writer and as a man.  Through my 20s, I read most of his novels and stories, particularly In Our Time, The Green Hills of Africa, and The Sun Also Rises (of which I’d read the latter twenty times or more).  He led me to Turgenev and Twain and Sherwood Anderson, and at least one book of the Bible, Ecclesiastes.  With some sense of urgency, I traveled to France and Spain.  I worked on a newspaper.  I began to drink heavily.  Although it’s been at least 25 years since I’d consciously let go of Hemingway as any kind of a model, here I am having another go at him.

I’ll start with the interview I recently viewed.  If you’ve read what Hemingway has said about himself, or what others have written about him in biographies—or, Heaven knows, hagiographies—you are told that he could speak French fluently, read Flaubert’s Madam Bovary in the original, knew German, and also spoke Spanish.  In The Sun Also Rises andThe Old Man and the Sea, as well as several short stores, he peppered his prose with Spanish words and phrases.

I don’t mean to be nit-picky but for crying out loud, after listening to the interview, I have to ask: Was this the level of his Spanish when he was driving an ambulance during WWI in Spain, or when he fought with the Republican Communists during the Spanish Civil War, or when he was chumming around with Fidel Castro and Che Guevara in Cuba?  He must have missed a lot of the conversation or had an interpreter.

And note, Hemingway was being interviewed at the end of his career, not at the beginning.  Was he just having an ‘off day’?  Had his brain already become pickled from years of heavy drinking?  I speak Spanish more fluently.  Gwyneth Paltrow speaks better Spanish.  All these many years I continued to hold this idea of Hemingway as a towering intellect, a man of letters and languages; but in the interview, he used soy instead ofestoy. He virtually ignored a complex question asked by the interviewer on how Cuba had influenced him as a writer and, instead, launched into the probably rehearsed, linguistic theme of The Old Man and the Sea on the difference between la mar and el marin very pedestrian Spanish.  Oh well.

I began to break free from Hemingway’s magnetic personality after I quit drinking at the age of 29 and sobered up.  Shortly thereafter one clear-headed day I asked myself: Why in the world cannot I write ‘can’t’?  Why do not I write ‘don’t’?  Why will not Hemingway let me write ‘won’t’?  Good grief.  Hemingway adamantly didn’t use contractions so I didn’t use contractions.  Scales might have fallen from my eyes.  I’m no polyglot but name me a language that doesn’t ellipse and elide, compress, blend in, or telescope in spoken and written forms.  English does.  Spanish does.  That’s how people talk and write—and Hemingway’s writings are almost nothing but talking.

I’m inclined to think that his hard-headed dicta was a manifestation of his addictive personality, the obsessive compulsive behavior of the alcoholic.  I know all about it.  Maybe if he’d loosened up a little bit, he would have grown as a writer; but instead he held to this narrow principle his entire life.  Couldn’t he have taken a risk and tried something new?  Couldn’t he slip the surly bonds of his own hidebound code?  He could hunt kudu in Africa, elk in Idaho, game fish for marlin in Cuba and Mexico, sip brandy and chomp a cigar as he watched Che Guevara murder his political enemies in Cuba—but he couldn’t use a contraction?

Click the link to read the entire article:  https://europeanconservative.com/2018/12/shattered-reflections-on-hemingway/
Posted by Mohican Lake at 3:31 PM