Reflections on Gerard Manley Hopkins and “The Wreck of the Deutschland” 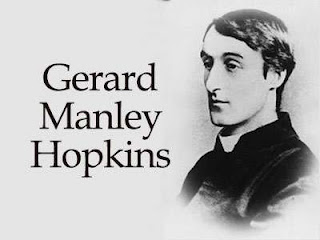 Reflections on Gerard Manley Hopkins and The Wreck of the Deutschland

I'm no Bertie Wooster when it comes to singing in the shower. In fact I don't sing, I mostly read poetry aloud, and I usually don't shower; I bathe because the book would get wet. The wall tiles in the bathroom make for theater-like surround sound.

I've read anthologies of sonnets, collected works of individual poets like Robert Herrick or Robert Frost or Emily Dickinson. I've done Shakespeare in the tub. For example, I did Macbeth in about 10 days. Hamlet took longer. Recently, I read Sophocles's Antigone.

But I also do a few revivals, a couple of long poems that I read again and again: Coleridge's The Rime of the Ancient Mariner, Keats's On the Eve of St. Agnes,and one of my all-time favorite poems to read aloud, The Wreck of the Deutschland by Gerard Manley Hopkins.

Reading Hopkins's poem aloud is a revelation, and I'm convinced that it's the only way that it should be read. And being submersed up to your neck in water, upon reflection, adds to the understanding. Not to be flippant, but Hopkins wrote the poem in memory of five Franciscan nuns who drowned in the wee hours of the morning of December 7, 1875. They were passengers in a ship called the Deutschland that ran aground and broke up in a terrible storm at the mouth of the Thames River in England.

I tried to read the poem many times because I had to. Right? It's his most famous, the pinnacle of his poetic achievement, the consummation of his sprung rhythm theories, the triumph of sound over sense. And it's a religious poem that even a secular could enjoy, bad things happening to good people, a theme that atheists use to deny the existence of God, and Christians ponder to understand the mystery of suffering.

My first introduction to Hopkins was in a college literature survey class. I can't remember why I chose the poem Spring and Fall or if it had been assigned, but my task was to read it aloud to the class, give a brief bio of the author and analyze it.

This was a secular college and I'd already disavowed my vaguely Christian upbringing and proclaimed myself an atheist. Yet I learned that Hopkins had been a priest (which didn't put me off), was a bit of an eccentric (like me) and was an original, developing his own unique metrical theories (much like Emily Dickinson, a poet I greatly admired).

And to top it off, reading Spring and Fall is a blast. It's lilting and lovely and sad and musical. It begs to be read aloud. This poem led me to read some of his others, particularly his rule-breaking sonnets.

Spring and Fall
to a young child

Márgarét, áre you gríeving
Over Goldengrove unleaving?
Leáves like the things of man, you
With your fresh thoughts care for, can you?
Ah! ás the heart grows older
It will come to such sights colder
By and by, nor spare a sigh
Though worlds of wanwood leafmeal lie;
And yet you wíll weep and know why.
Now no matter, child, the name:
Sórrow’s spríngs áre the same.
Nor mouth had, no nor mind, expressed
What heart heard of, ghost guessed:
It ís the blight man was born for,
It is Margaret you mourn for.

The next time I heard the name of Hopkins, I was watching an episode of The Waltons when John Boy reads The Windhover to his mother on her birthday. I was glued to the TV set every Thursday (I know that dates me), so John Boy's reading of it gave Hopkins for me some extra cache.

In retrospect I think John Boy should have been reading this to his girlfriend and not to his mother but that's a different essay. I also have to note that I had an Oldsmobile Achieva and I couldn't say the name of that car without thinking, “the achieve of, the mastery of the thing,” despite the fact that it could barely make it up a hill at 30 miles an hour.

To Christ our Lord

I caught this morning morning's minion, king-
dom of daylight's dauphin, dapple-dawn-drawn Falcon, in his riding
Of the rolling level underneath him steady air, and striding
High there, how he rung upon the rein of a wimpling wing
In his ecstasy! then off, off forth on swing,
As a skate's heel sweeps smooth on a bow-bend: the hurl and gliding
Rebuffed the big wind. My heart in hiding
Stirred for a bird, – the achieve of, the mastery of the thing!

Brute beauty and valour and act, oh, air, pride, plume, here
Buckle! AND the fire that breaks from thee then, a billion
Times told lovelier, more dangerous, O my chevalier!

My first encounter with The Wreck of the Deutschland occurred in a modern poetry class. I couldn't penetrate it. I tried, believe me. It bored me to tears, until the day I broke it open in the tub. I read it aloud and thoroughly enjoyed reading it. It sings. There's so much sound, so much melody, words sliding into other words, alliterations, internal rhymes and strong rhythms. And that's how I took it at first, and maybe that's where Hopkins wanted me to take it, where he excels or impresses or has influenced modern poetry. In the delicate balance of sound and sense, Hopkins heavily tilted to sound. But wow, the achieve of! I'd finally read it from start to finish, and I enjoyed it, too.

And I read it aloud again and again over the years before, during and after my conversion to Catholicism, and one day it struck me. In the same way that this ship gets stuck on the shoal and breaks apart in a gale-force storm and people begin to drown one by one, I too was drowning in a sea of words. That's it! Hopkins wanted me to drown, to become overwhelmed. When you read that poem, particularly the last half, it's difficult to find a literal reality to cling to. But every now and again, you'll bubble up to the surface and see the “jay-blue heavens appearing” or the “moth-soft Milky Way.” But then back down you'll go, into the raging sea, and as you are ready to give up the ghost – as those five nuns and others did that night – Hopkins asks you to contemplate ultimate things, God, suffering and the Cross.

Read more at:  Dappled Things
Posted by Mohican Lake at 10:21 AM