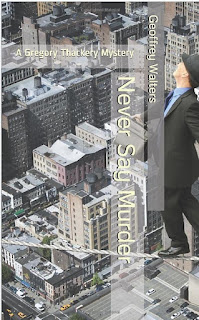 My first novel, NEVER SAY MURDER, has been re-released. It's an amateur sleuth murder mystery originally published in 2005 by a small press. NEVER SAY MURDER is part one of a five part series featuring Gregory Thackery, a young man who always seems to become the prime suspect in a murder he must investigate.

"Walters manages to deliver, no matter what your preference in fiction may be. Fast paced and a fast read, he weaves a story that will keep you on the edge of your seat and manages to mix in some new elements." —POD-DY Mouth


"Mr. Walters bares down description to its elements and spins a tale of believable events and motivational reasons for his character to find the truth. The style is blunt and fast paced. Following the hero’s journey, NEVER SAY MURDER has a well defined story line." —Futures Mystery Anthology Magazine

"The narrative premise is solid, and the author demonstrates a particular talent for creating a viable set of suspects." —Kirkus Discoveries

"NEVER SAY MURDER is almost a pulp detective story, except there is no detective involved. But Walters infuses his tale with all the great qualities of Nero Wolfe's Archie. Greg is the hero and narrator of the story. There is a murderer out there and colorful characters who have something to hide. The plot takes place in New York, the Gotham of murder. A great tale!" —Midwest Book Review

"It's a fast pace enjoyable, at times a bit funny, [whodunnit.] By funny, it's just the way the writer presents his characters. I could envision them. The characters are well developed and interesting. The plot is quite good, really. All in all, good reading! And NEVER say, 'I could just murder that person!'[;] you could become a suspect." —June Ahern, Amazon Reviewer