Edge of your seat intrigue that keeps one glued to the words... 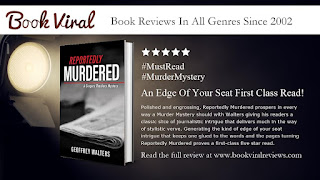 Polished and engrossing, Reportedly Murdered prospers in every way a murder mystery should with Walters giving his readers a classic slice of journalistic intrigue that delivers much in the way of stylistic verve.

Moving along at a brisk clip Reportedly Murdered is paced like a police procedural with Walters wringing suspense out of the parsing of nuances as protagonist Gregory Thackery digs deeper into the "reportedly murdered" Bordeaux.

The writing is first class and there are more than enough unexpected plot twists to keep the attention of readers throughout as Walters pulls his readers into the ensuing drama, but he’s not one to give anything away. Keeping readers involved and “in the moment” until the final chapter has come to a conclusion.

The key to keeping Reportedly Murdered from becoming just another genre crime novel is Thackery. A much-conflicted character he’s the kind of guy who occupies the school of hard knocks for a living and Walters is quick to bring him to life by capturing little quirks in typical conversation, spontaneous explicit declaratives and a good smattering of wit!

Tight, focused scenes create a sense of realism that draws the reader into the story as Thackery struggles to make sense of the clues he unravels whilst taut layers of intrigue raise Walters’ narrative above the genre generic to something more profound.

Following tips, hounding sources, and having one door after another slammed in his face Thackery’s story is further lifted by a cast which leans into the story’s urgency and continued relevance. Especially when he finds himself as a person of interest in Bordeaux’s murder!

Generating the kind of edge-of-your-seat intrigue that keeps one glued to the words and the pages turning. Reportedly Murdered proves a first-class read and is unreservedly recommended.
—Book Viral Reviews