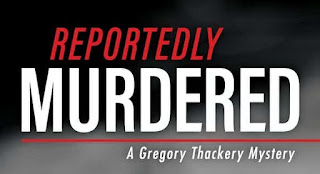 With Reportedly Murdered, Walters has a realistic reporter-turned-detective mystery. Each character, all unique and intriguing, is a viable suspect. The colorful cast is what keeps this story so rich.

Walters has a gift for writing dialogue infused with unique quirks and habits. I felt as if I knew all of the characters personally by the end of the story.
Reportedly Murdered is a fast-paced, easy read that is hard to put down. Set in New York City, it feels like a good old fashioned whodunnit detective mystery, even though Gregory isn’t really a detective.
Walters concludes the story neatly, giving readers the closure that we’re looking for. Fans of the mystery genre and detective fiction are going to enjoy this one. Here’s to hoping Walters continues the Gregory Thackery series.
—Independent Book Review
Posted by Mohican Lake at 6:20 PM