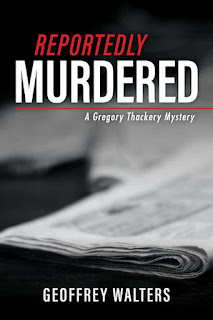 “Geoffrey Walters brings deadpan wit and well-wrought prose to bear on a genre that too easily devolves into formulaic and unfunny noir, knowing all the while that—as Flannery O’Connor put it—‘evil is not a problem to be solved but a mystery to be endured.’”  Joshua Hren, author of Infinite Regress

Preview my book or request a review copy at: Reportedly Murdered